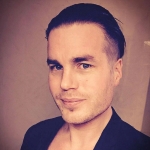 Johan Normén works as a speaker, mentor, team leader, agile coach, and senior .net developer at Softhouse in Gothenburg Sweden. He has over 18 years business experienced and worked in many different projects and roles. Was one of the creators of Swenug (Sweden .Net User Group) with over 3000 members all over the country. He started the computer era as game designer at the age of 12 with his Amiga and team. He has been nominated as the top 10 developers in Sweden in the Swedish version of Computer Sweden 2015 and member of IDG Expert Network Team