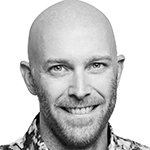 At some point in your life, you start realizing that re-inventing the wheel isn't the best way to spend your time. Especially since Bob Wheel Sr. perfected that invention many, many years ago. And it's the same with software. Smart people have already encountered a lot of the problems that we face every day while building software. Some of them have even been nice enough to write down their solutions in so called "patterns". So why not stand on the shoulders of...well...maybe not giants...but at least very smart people who were born before you, and build on top of their hard-earned wisdom?

This session, will walk you through a bunch of really useful patterns, and you'll not only learn their names, but also why they are useful and how to implement them in .NET. And maybe, just maybe, you'll even see that one pattern that solves that problem you are working on at the moment. But even if you don't see that one pattern that you need, you will at least get a few that you can store in your toolbelt for future problems.

Works on my machine… Docker for developers
Katrinebergssalen, Friday 11:10 - 12:00

There is a LOT of talk about containerization today, and about Docker in particular. At least in the Microsoft world. The rest of the world, has been using it for quite a while, but seeing that it is mostly Linux based, it has had some problems getting traction with Microsoft developers. But that is about to change. The technology raises a lot of questions though. What is it? Why is it awesome? How do I get started? How can it help me? Is it just for huge companies like Netflix? Is there any reason to use it if you aren’t running a 100+ node cluster? Will it blend? All of them valid questions when you are getting started, but once you get over the initial “what is it?”, you quickly get into “that is really cool” and “why hasn’t anyone told me about this before”. And you realize that there are a lot of reasons to go further and learn more. In this talk you will get an introduction to Docker, what it is and what it does, and then a walkthrough of how to get started with it. You will get to see the tools you need, the initial commands you need to know, as well as some demos showing some of the cool things you can easily do with Docker. Taking you from “what is it?” to “this is how you set up a cluster with several containers in minutes” in an hour-ish.

Chris Klug is a developer badass-as-a-service that either creates or solves problems depending on who you ask. He loves creating and building things. Whether it be a new application, a new kitchen or a new RC helicopter, you will see him building things all the time. Most of the time, that means writing code and solving problems for clients at a company called tretton37 in Stockholm though. Except for the many days he spends at conferences and usergroups, talking about doing things he is passionate about, and for the days he goes mountain biking, IPSC shooting, kiteboarding or RC helicopter flying. For the last 15-something years, he has been solving problems for customers, and loving it. But if he gets to choose, he'll go to the beach and kitesurf every day!